The Centers for Disease Control and Prevention (CDC) reports that there were more than 2.9 million deaths reported in the U.S. in 2019, with nearly two-thirds due to cardiovascular disease or cancer.

This article will detail the leading causes of death for each of the four age groups below:

Leading Causes Of Death In The U.S.

Before we focus on each of the four age groups mentioned above, let’s look at an aggregate view of what causes death in the U.S.

The table above shows a breakdown by age group of the total U.S. population, the number of deaths, and the death rate (deaths per 1,000 individuals) for 2019.

As you might guess, the likelihood of dying increases by age almost uniformly, with the date rate going from just ~1 person per 1,000 when people are in their late teens, and early 20’s to 132 deaths per 1,000 for individuals over the age of 85.

Table: Leading Causes Of Death In The U.S.

Heart disease and cancer are by far the most significant causes of death. These two accounted for 1.5 million deaths in 2019. That’s over half (53%) of the total 2.9 million deaths nationwide.

In total, these five causes of death account for nearly 80%, or four in five, U.S. deaths.

Cardiovascular disease causes heart attacks and strokes, among the top causes of death for Americans over 65 years old. These diseases can be further broken down into types as well – coronary artery disease accounts for 47% of cardiovascular-related deaths in the United States.

Cancer is a malignant growth of abnormal cells in any part of the body. There are more than 100 types of cancers, and causes can include viruses or other exposures to cancer-causing agents such as:

These causes of death can affect anyone but tend to be more common among those over 65 years old.

External causes of death are classified as injuries, accidents, homicide, suicide, and undetermined.

External causes of death are those not caused by an internal agent or an infectious agent.

Problems with the endocrine system, including diabetes and thyroid disorders, are one of the causes of death in people aged 45 to 64.

Digestive system-related deaths include liver cirrhosis/failure (12%), chronic lower gastroenteritis & colitis (11%), as well as gallbladder & biliary tract disease (13%). Malnutrition can also be a cause of death (12%).

Musculoskeletal causes refer to a variety of conditions, including arthritis, osteoporosis, and rheumatoid disorders. These causes account for about 11% of deaths across all age groups.

Infant mortality is the death of an infant before their first birthday. The infant mortality rate in the United States is 5.6 deaths per 1,000 live births.

Almost 21,000 infants died in the United States in 2019. The five leading causes of infant death were:

Common birth defects include heart defects, cleft lip and palate, and neural tube defects (e.g., spina bifida).  These diseases affect about one of every 33 babies born in the U.S.

Sudden infant death syndrome (or SIDS) refers to when an infant dies suddenly while sleeping without any signs of suffering or distress.

For more detailed mortality data for infants, check out this dedicated page from the CDC.

The five states with the highest infant mortality rates in 2019 were:

The five leading causes of death among teenagers are:

Accidents account for nearly 50% of all teenage deaths. Among these, motor vehicle fatalities are the leading cause of teenagers’ deaths.

Leading Causes Of Death In Teenagers

The chart below shows the leading causes of death for the teenage population as well as a breakdown of accidental deaths by “mechanism of injury”:

(Note: “Other unintentional deaths” make up the final 10%.)

Causes Of Death: Adults Under 50

The top causes of death for men and women in the under 50 age group are mainly preventable.

Illnesses in this age group are primarily due to lifestyle factors such as exercise, diet, and stress. Changes to your eating habits, physical activity, and lifestyle habits can help lower your mortality rate and add years to your life.

Breakdown Of External Causes Of Death​

Accidents are by far the leading cause of death in adults 50 and under.  Of these, accidental drug overdose deaths make up the largest share.

The second most significant cause of external death in this age group is deaths from auto accidents.

After accidents, suicide is the third leading cause of death in this age group.

While the CDC classifies suicide (and drug overdoses) as resulting from an external cause, it could be argued that those are the proximate causes.  The ultimate causes are based on brain physiology, and therefore, these deaths should be classified similarly to how they are treated, like illnesses.  In other words, the ultimate causes of these “external” deaths are brain conditions, such as bipolar disorder and major depressive disorder.  The more we see conclusive data that treatments like Esketamine and TMS therapy work for patients with MDD and suicidal ideations, the more likely we are to see these deaths re-classified.

Homicide kills more people than HIV.  Protect yourself and your friends by keeping an open line of communication to resolve conflicts and report any threats or suspicions to law enforcement.

Alcohol abuse is not just destructive emotionally; prolonged and regular alcohol abuse can lead to liver disease and cirrhosis.

Causes Of Death: Adults Over 50

It’s no surprise that the mortality rate for Americans goes up significantly as they pass 50 years old, from 6 deaths per 1,000 individuals for people in their 50s up to 207 deaths per 1,000 people for those ages 90 and above.

Deaths By Cause & Mortality Rate: Ages 50+ 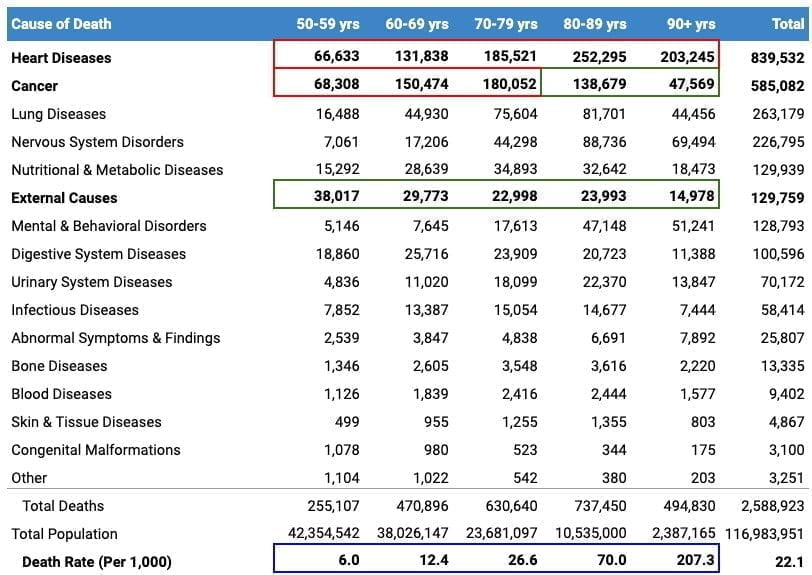 The leading causes of death among adults over 50 are heart disease, cancer, chronic lower respiratory diseases (such as bronchitis and emphysema), stroke, Alzheimer’s disease, diabetes mellitus (including both type 1 and type 2 diabetes), influenza, and pneumonia.

The good news is that with a proper diet, most diseases can be prevented or delayed. There are some simple rules that you should adhere to for the most part, including eating a lot of produce – this doesn’t mean French fries! When it comes to meat, eat lots of white meat like chicken breast, etc. Avoid fatty red meats like lean beef cuts only, please! Produce overload is significant to get the right balance of nutrients; they look a lot more appetizing.

According to the CDC, in 2020, there were more than 70,00 overdose deaths, which equates to nearly 200 overdoses every day.

These 200 daily overdose deaths are made up of:

What are the leading causes of death by age?

Which age group is the most suicidal?

What are the leading causes of death in the U.S.?

The five leading causes of death in the United States are heart disease, cancer, chronic lower respiratory diseases, stroke, and unintentional injuries. Together they accounted for 63 percent of all U.S. deaths in 2010, with rates for each cause varying greatly from state to state.

Other causes specific to the senior age group include Alzheimer’s Disease and other brain conditions, including Parkinson’s Disease, strokes, and dementia.

Educating yourself about your potential causes of death in your age group can help you adopt healthy habits (e.g., a good diet, regular exercise, tobacco and alcohol avoidance, and proper firearms storage, among others) and live a long life. 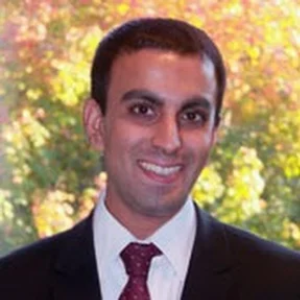 Rikin Shah
Rikin is the Founder & Head of Content at GetSure. He is a licensed life, accident & health insurance agent, with over 10 years of experience in the financial services industry. He holds a B.S. in Applied Mathematics from Columbia University and an MBA from The Stanford Graduate School of Business.